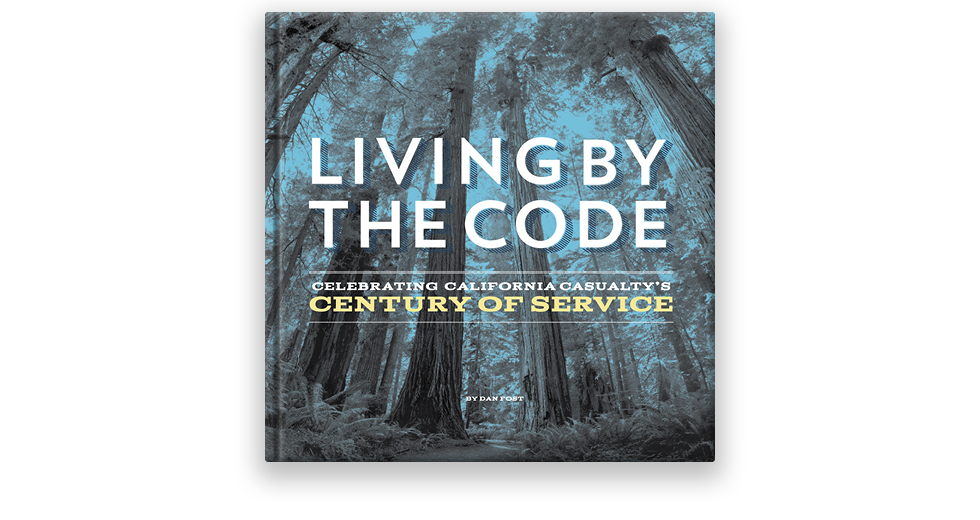 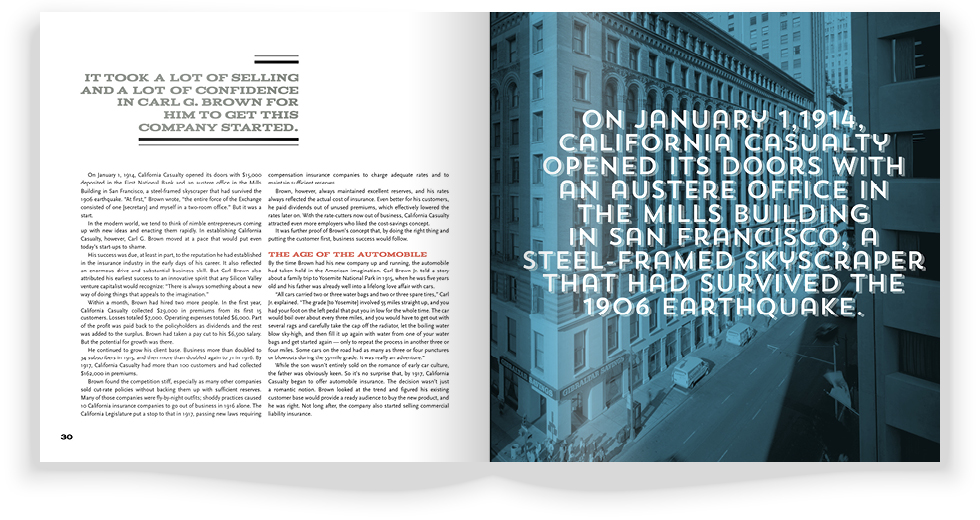 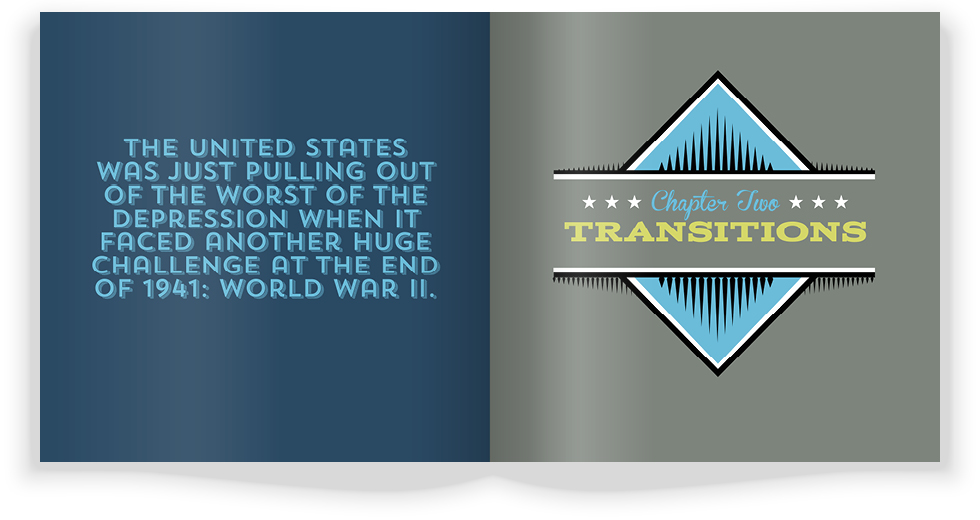 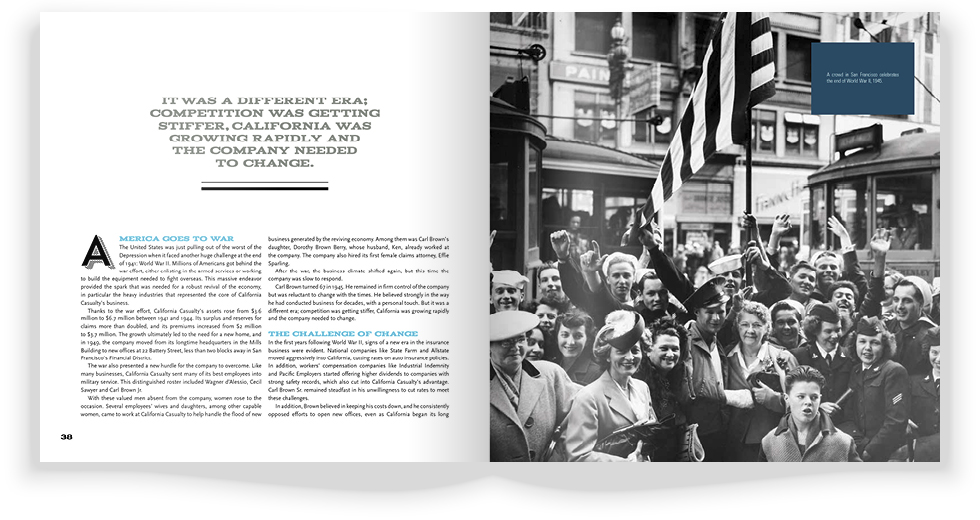 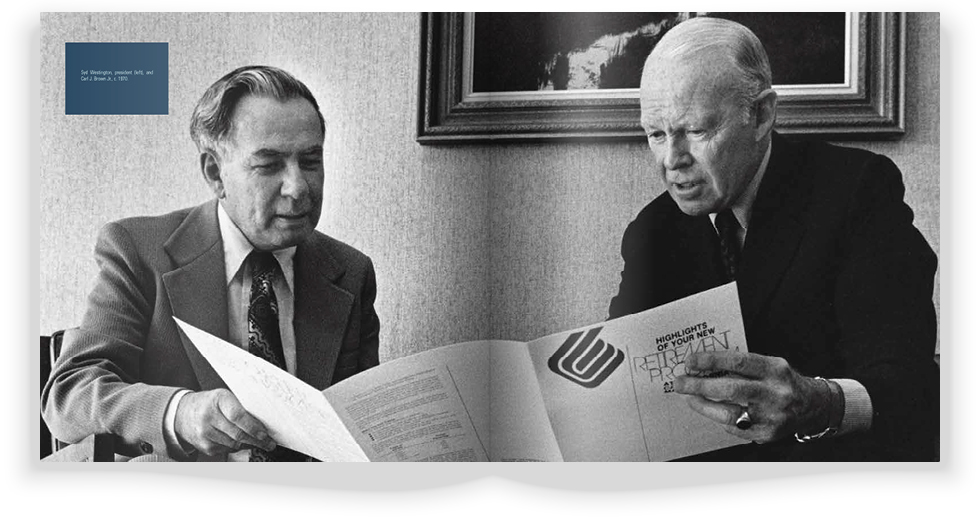 The book is beautiful and it is being received by our employees, partners and key clients with great enthusiasm. It is the cornerstone of our 100-year anniversary campaign, and we are very proud of it. Thank you and your team for producing an incredible legacy for us.
— Beau Brown, CEO, California Casualty

California Casualty, a family-owned national insurance company headquartered in San Francisco, had done a book over two decades ago for their 75th anniversary and wanted us to update the book for their centennial. We were tasked with chronicling the recent 25 years and giving the new book a fresh, modern design. The client initially didn’t want us to fiddle with the story of the first 75 years even though we shared our view that it was too formal for such a dynamic company.

Solution: Kick Off With Integrity

We knew we had to start the book with the company-defining experience of the 1991 Oakland Hills fires. The devastating blaze destroyed over 3,000 homes, 30 of which were insured with California Casualty. As soon as he heard the news, Tom Brown, the CEO at the time, made the decision to take the limits off their customers’ policies and pay whatever it took to rebuild their homes. That’s the California Casualty Code and we wanted to kick-off the story with a tribute to its rare standard of integrity. After they read our first chapter, not only did the client agree with us, they offered to expand their budget to make time for our writer to update the first 75 years so that the whole story read with the same passion, colour and flow.

Meanwhile, our art department got to work on the challenge of making sure that the design was as exciting as the story. We knew we’d have to push California Casualty’s aesthetic comfort zone just a bit, so we presented a design that was classy and just a little cheeky. Drawing inspiration from Mad Men and the Golden Age of California, the client was surprised and delighted with the iconic imagery we found and our innovative use of graphics and typography.

Results: “This is Our Story”

The CEO’s primary goal was to create a book that would make his employees and partners feel “this is our story.” After the books were distributed at the centennial gala, he sent us the rave reviews he received from employees across the country, many of whom describe how they sat down expecting to flip through the book but found themselves still engrossed in the story, hours later.

California Casualty lifted elements of the book to build a micro-site on their website to leverage the celebration of their centennial year online.